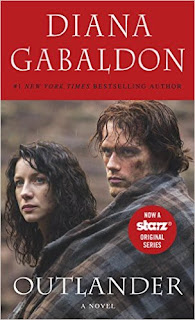 I have already posted a review for The Outlander Book 1

and you can read it here:  https://elisabethzguta.blogspot.com/2016/04/outlander-book-review.html

Here are a few more thoughts of mine about the books. I hope you find my short reviews an enticing glimpse and encourages you to read them if you haven't already. I know some fellow readers who began the series and gave up after a few books. It is a long series, but I found the payoff worth every word. You may notice that toward the end I began listening to the books via Audible. The experience was better while reading, however, the audio books were done well. (I missed reviewing book 5, but it was as good as the others)

After reading the first book we have come to expect a story with in-depth characters and meandering plot, and this book delivers. The pace is character driven and very creative. Excellent time and setting descriptions, and very enjoyable travels. Bravo, looking forward to next story in the series.

The suspense continues with book three Voyager. The story goes from the 1700's to the 1960's and then back again. The reader experiences the troubles of Jamie and his tribulations after the battle of Culloden. Lots of pain and dark thoughts are touched, so not for the faint of heart. Also, the reader is plunged into the world of Claire and daughter Brianna in the 1960's. We see their relationship with each other and follow their search to find answers in the written history of Scotland.

It is a precarious situation, balancing the truth with what the heart yearns. The pace is often fast, yet the author is laborious with words, at time verbose, but I could not skip a sentence. Every character and new place is described in detail and lends to the reason I became so involved with the story of their lives.

This is not a quick read, nor a book to skip through parts because each detail quickly propels into a turn of events. Suspenseful, emotional and heart rendering situations throughout. The ending reveals clues to future scenarios and definitely hooks the reader into the next book, which I am currently reading. Well done and captivating characters. 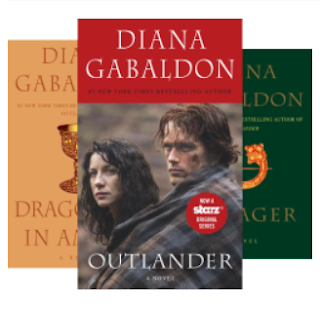 The book Drums Of Autumn opens in Charleston, June 1767 with scorching sun and new troubles to overcome. Claire and Jamie drench the reader with a wide-screen description of new places with their travels. The humid weather and torturous journey, plagued with escaped criminals, theft, and humbled introductions, lands them on the doorstep of Jamie's aunt from the McKenzie side. Then chapters bounce forward to the late 1960's for a bit, and the other story thread of Brianna and Roger, not quite the mirror image of her parents' love story, however similar in some ways. The influence her parents had on her relationship in itself could be a long discussion.

There is a large cast of characters, and the reader sees each of their growth as they plow their way through perilous situations with action. The characters old and new are larger than life. We meet Jamie's Aunt Jocasta and her glorious estate which also causes personal dilemma to our heroes when faced with the immorality of slave owning. They retreat to the mountains and stake a claim, and create their own homestead. Old friends come to visit. The reader is drawn to Jamie and Claire just as they are. Once again, Claire heals all and survives despite herself while Jamie shows his physical and moral strength and leadership qualities. . . Until he messes up big time.

From the midpoint of the book until the end terrible situations happen and the pace quickens. Each main character, Jamie, Brianna, and Roger, being strong willed and dynamic in their own right, bring lots of action packed adventure. Also some heroic acts by the other characters like Ian and John Grey. One of my favorite scenes took place at a Mohawk camp where they were holding a Jesuit. I would have liked to have read more story about Father Alexandre. He was an interesting new character; however his presence was short-lived, so there will never be more to learn about him. I also liked the scene when Brianna faced Bonnet and the scenes where John Grey gave her emotional support. It's refreshing to read about characters living by their high morals.

This story had many character arcs and some unexpected situations which kept me reading. The author does get a bit long-winded in some of the scenes; however, it's worth the time for the overall story. The ending was a trite too Pollyanna-ish. But after everything the cast went through, they deserved a happy moment. Very exciting book - I'd recommend it to anyone who likes action adventure and/or historical fiction. Looking forward to reading the next book in the series.

A Breath of Snow and Ashes (Outlander, Book 6) (Paperback)

This novel is exactly what fans expect from Diana Gabaldon's books. Well developed characters fill the pages with plenty of family drama, insightful and heartfelt moments, as well as developed settings based on intense historical research. While reading there is no skipping over scenes because the next exciting incident and plot twist can happen in a flash. This story reads authentic and tells of the challenges faced in the times while continuing our favorite couple's journey. Claire and Jamie Fraser's adventure of life in the wilderness (Fraser's Ridge) is filled with compassion and drenched in realism. Definitely an exciting book to read.

An Echo in the Bone: A Novel (Audible Audio Edition)

More drama as Jamie and Claire try to get back to Scotland to retrieve his printing press. Detoured, they land in the middle of battles for the Revolution in New York, where Jamie is once again leading the soldiers but this time he has worries for the survival of the other side as well.

More characters are introduced along the way as well as more insight into William, Jamie's illegitimate son. We say good-bye to some of the favorite characters that we've grown fond of as well. Drastic measures are taken, as always in these books, and the ending left me wanting to reach out for the next book in line.

Great drama, though the writing is a bit verbose at times.

Written in My Own Heart's Blood: Outlander (Audible Audio Edition)

So this is the last book (so far as we know) of the Outlander series "In My Own Heart's Blood" which ended the family saga while the reader could still imagine more drama in their futures. I like when an author leaves an opening for our imaginations instead of leaving with an absolute ending. We know by the previous books that the Fraser family have a lot more to do and given the strong characters we've read so far, the reader can infer that more of life's drama awaits them with open arms. 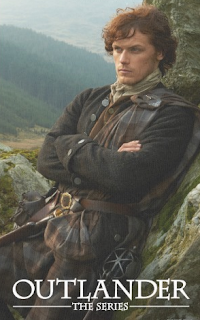 The Outlander series is a great story line, each novel gave details of personal tragedy and happiness, and this last book was filled with the same: lots of plotting, strong dialogue, deep character development, and visual scenes that the reader can embrace. Of course, the scenes are packed with history as well. However, I didn't feel compelled to check them to know for sure accuracy. It doesn't matter because it's a fantasy story that will pick up the reader and carry one away to another world, just as we like our stories to do.

I recommend this book - if anyone gets stuck on a previous books, I implore you to keep reading.

The ending is worth the hours spent. Who knows, someday the author might pick up the story line again, it is a possibility, or we can just continue to let our imaginations go on with our own made-up scenes . . .

I Hope you enjoyed my reviews - You can find the books here: OUTLANDER 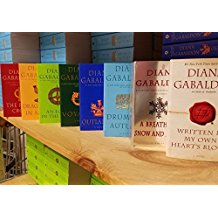 Posted by Elisabeth Zguta, Author at Friday, March 24, 2017 No comments:

Review of A True Gothic Tale 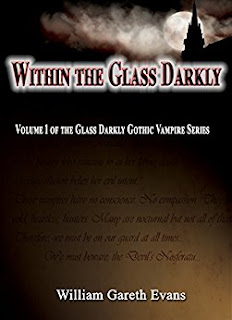 Within The Glass Darkly: Volume 1 of the Glass Darkly Gothic Vampire Series
written by William Gareth Evans
This book is truly written with Gothic flare but can pass muster for today's discerning horror thriller reader. The atmosphere is an extra character, and the plot is well paced and challenges the nerves.
It has been awhile since a book in the Gothic genre has entertained me so well. The story rings true, all the expectations of an old-fashioned horror tale are met. Unlike the old books, this story held nothing back. The macabre was presented to the adult reader in an honest manner while adhering to the conventions of a real Gothic horror. Great scenes and descriptions of churches and Paris streets, developed characters with love interests and secrets, and let's not forget the heroes and villains who jump off the page.

Don't read this book in the dark.

I first read the short story Carmilla by J.S. Le Fanu since the author did get inspiration from that short story and used the character General Spielsdorf, as his protagonist, and the Karnstein brother and sister as antagonists. The author, William Garrett Evans, breathed new life into these characters and submerged them into a twisting plot that kept a good pace. The horrors were over the top, just the way we like our Gothic fiction.

I will begin the second book in the series, compelled to see what develops for General Theodore Spielsdorf and his new associates introduced at the end of the first tale. It suggests an even deeper, mystery with much more to come . . .
I'm looking forward to reading book two.
More about the author:

William Gareth Evans is from Wales and trained as a professional actor, he has worked in theater and television. He has written, produced and directed touring shows with his own company, and now is an associate director of a successful London based management for professional performers. 'Within The Glass Darkly' is his first novel. As a writer/lyricist, he has been involved in many musical theater productions, including two previous shows that were broadcast on BBC and independent radio in the UK.
'Dracula' was his first collaborative musical theatre project this century. The professionally produced CD is available from the Dracula musical website http://www.dracula-uk.com/ and other online stores. The professionally directed video of "Within My World" from the musical has been continuously broadcast on the O-Music channel during 2009. It is also available to watch via the internet.
William's company co-produced a feature length horror movie by an established and award winning screenwriter/director which was released in 2010. William is currently working on another novel and has just written new material for the complete Dracula musical recording.
Posted by Elisabeth Zguta, Author at Thursday, March 16, 2017 No comments: