Wonder what makes a series successful? 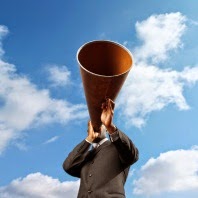 Me too, so I read as many series as possible. Here's a great political spy series - Beck Casey Thrillers!

Check out my review and visit Amazon if you think you'll enjoy the thrills too. 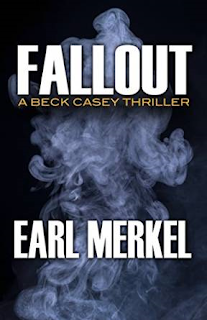 Another great Beck Casey story that pivots in various directions, until multiple strings meet and intertwine for an explosive conclusion. Followers of the series would expect nothing less. The story melds many political threads, foes and allies. The reader will get a close look at the threats and motivations of the characters as the plot pushes forward. Never a dull moment, from assassinations, buildings blown up, to computer viral threats. Even though a genre spy story, there are some unique characters in this book, using friends to fill in the ranks needed to pull off this complex story; like mine, a bomb tech, shows up in chapter 63! The plot uses all forces, from CIA, FBI, Mossad, MI6 and more . . . Definitely an insane political ride with surprises at every step. A great political thriller for the serious reader.

Fire of the Prophet

Fire of the Prophet: A Beck Casey Thriller Kindle Edition 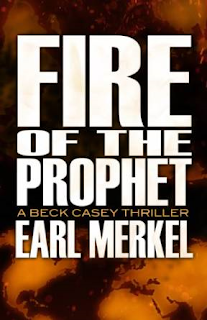 Pow! The opening chapter is a shocker, and you are immediately swept into a scenario that keeps the reader wanting to know more. Vivid scenes, like in an action film, take you into the story that is relevant to current topics of today.

Earl Merkel brings the reader close to the action, of what could be real life situations, and your worst nightmare come true! He uses his words to paint realism into the story, a candid and raw picture, entirely human.

The characters are developed with great insights into the daily life and business of journalism, politics and the military. Tense, suspenseful, nerving, and nail biting action, fill the pages. The author uses powerful words, and visual symmetry, while keeping the story timeline organized and easy to follow along, with multiple viewpoints and plots that are all part of the bigger picture. The flow from place to place, person to person, is done well.

Merkel brings unique flavor when he writes about the military side of the equation. A clear picture of the trauma and urgency, the men and women in active duty must endure every day, brought a new appreciation for our brave soldiers. Touching scenes of families reaching out to each other are emotional and heartfelt.

I highly recommend this book for anyone who likes action, spy plots and a good look at the humanity (or lack of by terrorists) behind the scenes. I thank you Earl Merkel for writing this wonderful tale. This book will surely be a story you will remember.


Also look at the rest of the series: 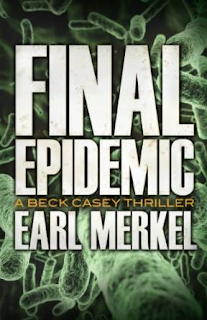 This is how the world ends...

An invisible killer has returned. The last time it raged, upward of forty million died—in a matter of months. Now it's back, released to prey on an unsuspecting, unprotected world.


Also check out this detective book: 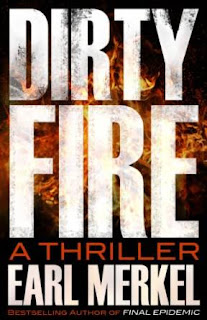 by Earl Merkel (Author)
Police detective John Davey once had everything—until bribery charges destroyed his career, his marriage, and his life.

Now he's been given a second chance. Davey is pressured into joining an investigation into the baffling murder of a wealthy Chicago couple savagely murdered before their North Shore mansion was set ablaze. To the city, it's a scandal. To Davey, it's overkill.

In the charred ruins, Davey finds clues to something more sinister than deadly premediated arson: a criminal maze threading back through history, and a connection to billions of dollars in artwork that disappeared during the Holocaust. As more victims emerge, Davey begins to suspect the motives of those he is forced to trust, with betrayal layered on betrayal, until he has no one left to believe in but himself.

Check out the newest on Earl Merkel's bookshelf:

The Law Of Unintended Consequences: A Faulk Carpenter Thriller 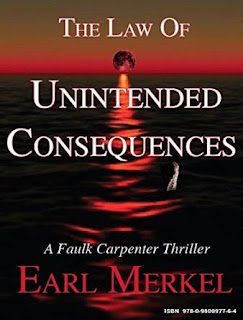 I have this on my reader and will get to reviewing it soon. It's so exciting to read a first book in a new series.

Below is the blurp -
Pick up a copy if it interests you and we can discuss the story as we read it!
A college student, missing for three decades. The scion of a Miami crime family, infuriated and sworn to bloody vengeance. A deep‐sea research vessel, blown to atoms by a dynamite bomb, placed by faceless persons who prefer the sea to keep its secrets forever.

And a visiting stranger, the unwilling nexus of this ever‐widening web of intrigue and violence, who arrives on the evening tides to seek out the resolution to long unanswered questions—that is, if he survives long enough to unravel it.

These are the elements that combine into a suspenseful narrative in The Law Of Unintended Consequences, and serve to proclaim an exciting new entry in the annals of today’s pantheon of reluctant heroes.

The Law Of Unintended Consequences is set in the scorching sun and sparkling shorelines of Northwest Florida’s Emerald Coast, where a tourist-playground façade scarcely conceals the ominous undercurrents of crime and violence both past and present.

For Faulk Carpenter, the quest for closure in Spanish Bay becomes its own odyssey: an often dark voyage that forces him to face his own demons, all the while he becomes prey to the law of unintended consequences throughout the obstacles, entanglements and dangers he encounters—both from others, and from himself.

Posted by Elisabeth Zguta, Author at Friday, June 12, 2015 No comments: